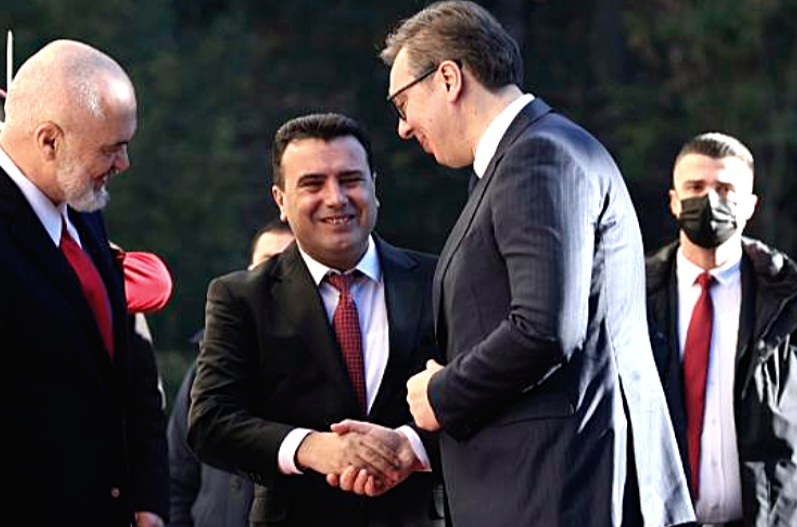 Leaders from Albania, North Macedonia and Serbia met Tuesday to discuss their Open Balkan initiative which aims at promoting political stability throughout the region.

In addition to signing labour market and electronic identification agreements, the ministers who accompanied them agreed to lift non-tariff barriers for businesses that will benefit “tens of thousands of people very soon,” stated Rama.

According to Rama, “our goal is to eliminate borders in the Balkans for people, goods, capital and services – four principles of the European Union.”

Germany and France initiated the Berlin Process to promote regional cooperation. The Open Balkan summit is part of that initiative.
The future cannot be accomplished by talking about the past, Vucic said. Rather, we are here to build bridges and to carry out our future plans.

On the path towards EU membership, each of the three Western Balkan countries is at a different stage.

The coalition of countries opposed to North Macedonia’s membership in the EU has been growing. Bulgaria, an original member who still considers himself part of this region’s heritage even after leaving it behind many years ago. Albania has been prevented from moving forward in the process of becoming an EU member because their bid is linked with Serbia’s and it requires unanimous approval. However, due to one country vetoing them this can’t happen just yet.

Zaev said that even if the EU decides not to invite us, we must constantly take steps to Europeanize our region and improve living conditions for our citizens.

The open Balkan initiative has been rebuffed by three other countries in the Western Balkans – Bosnia, Kosovo and Montenegro.

Taking place at the end of February in Skopje, North Macedonia, the next summit is scheduled for March.