Six Students killed In A 4-Seater Car In Oklahoma 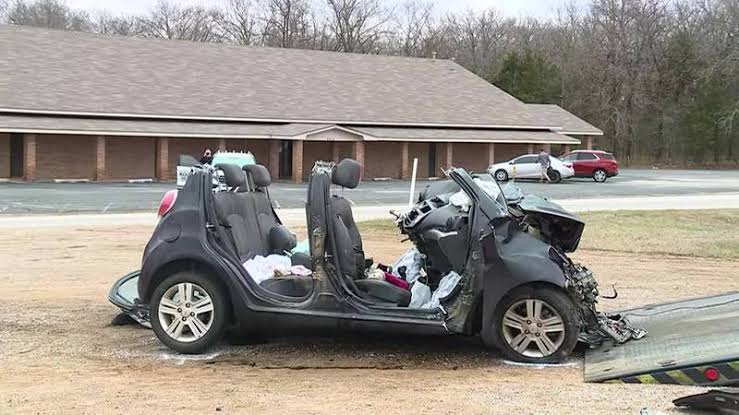 The Oklahoma Highway Patrol reported Wednesday that six teenage students were killed when their car collided with a semi.

The 2015 Chevrolet Spark carrying the 16-year-old driver and front seat passenger were not wearing seat belts when they collided with the rock hauler Tuesday afternoon in Tishomingo, a rural city of about 3,000 people located about 100 miles (160 kilometers) southwest of Oklahoma City.

The highway patrol said five teenagers, including the 16-year-old driver, were killed in the crash as well as three 15-year-olds and two 17-year-olds. Because the victims are juveniles, their names are not released.

Burton, 51, was not injured in the crash, according to the highway patrol. Burton is identified in the report as being the driver of the semi.

In the crash report, which was released Wednesday morning, no other details are given as the crash remains under investigation. However, OHP Trooper Shelby Humphrey said Tuesday night the girls’ car had been turning right when it collided with the truck, KXII-TV reported.

In a Facebook post, Tishomingo Public School Superintendent Bobby Waitman wrote that the district suffered “a great loss” following the death of a student at the district’s high school. “Our hearts are broken, and we mourn with our students and staff,” Waitman wrote.

Nine people were killed in a crash in West Texas one week prior – including six members of a New Mexico college golf team and their coach.

As a result of that accident, the National Transportation Safety Board determined that a 13-year-old boy was driving a truck when it crossed the centerline and struck a van carrying golfers from the University of the Southwest.