Thousands Line Up For ‘Jingle Jabs’ On Christmas In England 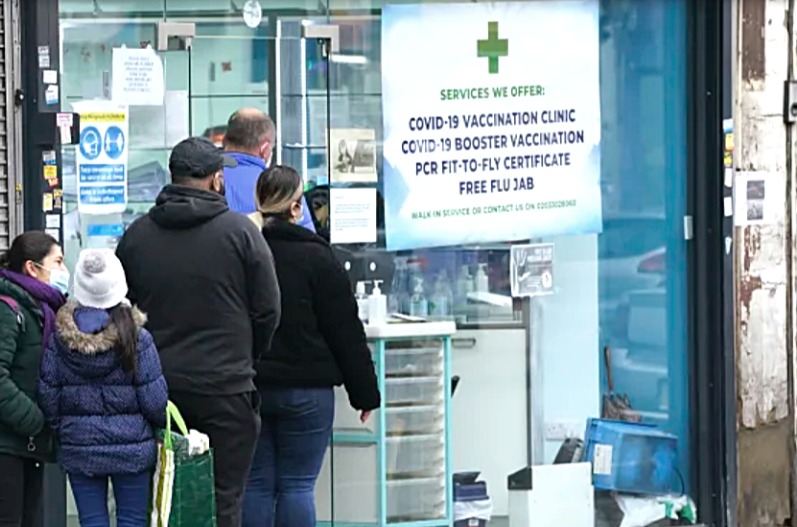 There is a surge of infections due to the new omicron variant spread by COVID-19 that has caused thousands of people to line up under leaden skies on Christmas Day in order to receive vaccination against it.

As part of a government initiative to offer booster shots to all adults by the end of the year, Good Health Pharmacy in North London kept its doors open Saturday to administer “jingle jabs.”

Pharmacy owner Fenil Lalji explained that they stayed open because they lost a family member to the epidemic and wanted to help others to stay safe.

As a result of their parents’ struggles, his children wanted to make sure that they could contribute to the fight against the COVID virus at the maximum level, Lalji said. The time he experienced was extremely difficult for his family, and we want to make sure no one else goes through it.

Following research that revealed two doses of the vaccine weren’t enough to prevent the highly transmissible omicron variant, Britain expanded its booster program over the past two weeks, reopening sports stadiums and cathedrals as inoculation hubs. The National Health Service has been racing to immunize as many people as possible, but last week for the first time during this pandemic, the number of confirmed infections exceeded 100,000 a day.

As part of his remarks, Sajid Javid called for people to “make the booster part of your Christmas this year.” The health secretary praised those providing the boosters over the holiday season.

In a statement, Javid thanked the NHS and volunteers for their tireless work, sacrifices, and selflessness in delivering life-saving vaccinations through Christmas Day and Boxing Day this year.

Office for National Statistics data released on Wednesday revealed there were 1.7 million in the U.K. having COVID-19 for the week ending Dec. 19, the highest number ever recorded since comparable figures began to be collected in autumn 2020.